This week's 52 Ancestors in 52 Weeks theme is "Tough Woman."  My paternal great-grandmother, Soulé Olive Lee Henderson has been one of my toughest people to research so far; so I selected her as the focus for my #52Ancestors "Tough Woman" post.  From what I've found (or, really, not found) her story has not been told before, and I also wanted to embrace this opportunity to tell it.

Soulé "Sue" Olive Lee was born on 01 October 1899 in Charlotte, Mecklenburg, North Carolina, to Henry Lee (1849-1901) and Lillian Elizabeth "Muttie" Woollen Lee (1862-1920).  She is descended from the Lees of Virginia, whose "founding father" was Richard Lee I, the Emigrant.  He arrived from England in Virginia from England circa 1639.  Richard Lee married Anne Constable (born 1622), also a native of England.


Soulé's paternal great-grandfather was Major General Henry "Lighthorse Harry" Lee III, a Revolutionary War patriot, the ninth governor of Virginia, a congressional representative for Virginia, and famously eulogized George Washington at his funeral by saying, "First in war, first in peace, and first in the hearts of his countrymen..."  Additionally, the famous Civil War general Robert Edward Lee was her grand uncle. (At this time, I am still tracing my direct Lee line and have currently gotten back to the 1200s in England.)

Given the famous and well-documented pedigree from which Soulé descended, one would imagine her to be rather easy to research...at least, that is what I thought before beginning!  In fact, it turned out to be the exact opposite.  Very little information existed on her, and I had to dig, call, and write to dig up documents telling her story.

Before I write about the reasons I found Soulé to be a tough woman to research, let me first tell you a bit of my family background related to her.  I grew up knowing only my step-great grandmother, a wonderful woman from Massachusetts named Emily Louise Heinlein Henderson (1903-1985).  I called "Mom-Mom."  I was aware that my biological great-grandmother, Soulé, had passed away when my paternal grandmother, Elizabeth Lee Henderson Wood (1921-2005) - "Nana" to me - was just a young woman; but I never knew too much else about her.  Once in awhile, the Lee family would come up in discussions.  But, in my younger years when I was around Nana the most, I was not very interested in family history.  By the time I became very interested in documenting my family history, Nana had passed away.  Her children, including my father, knew little about Soulé other than she had been "sick" and "died when Nana was young."  They, too, had grown up around Mom-Mom and only known her as their grandmother.  So, it was from that point that I launched into my own investigation, and here is what I found.

Soulé was born after the well-known history book, Lee of Virginia, 1642-1892:  Biographical and Genealogical Sketches of the Descendants of Colonel Richard Lee by Edmund Jennings Lee, M.D., was published in 1893.  Since she was not included in this go-to text on the Lee family, she ended up often - really always - being overlooked in future writings about the Lees. 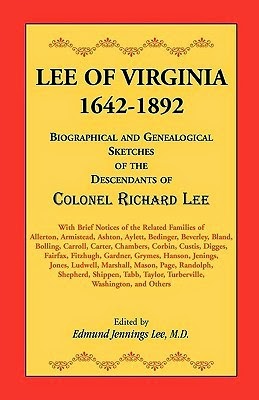 Additionally, her father, Henry Lee, passed away on 13 May 1901, less than two years after she was born.  I imagine that also may have contributed to her not being included in post-1892 writings about the Lees.  Her mother, "Muttie," remarried in October 1902 to Andrew S. Willeford.  He was born in 1846 in South Carolina but was residing in Georgia when they married.  Soulé's stepfather passed away just a few years later on 15 January 1914.  So, before Soulé turned 15, she had lost both her biological father and the only father she had ever known, her stepfather.


On 21 June 1915, the Charlotte (North Carolina) Observer newspaper indicates Soulé is living in Jacksonville, Duval, Florida, and has been visiting her aunt - Ruby Valerie "Tee" Woollen Miller, wife of William A. Miller - in North Carolina for six or more months.  It also states that she then traveled to Rocky Mount, Virginia, for "an extended visit" with her uncle, Judge John Penn Lee, and his wife, Isabelle.


Tragically, less than three months after she became a wife, Soulé became an orphan when her mother, died suddenly on 31 Oct 1920, in Jacksonville, Duval, Florida.  She brought her mother's body to Charlotte and had her buried there.  Sadly, less than five months prior to her wedding, she also had lost her maternal grandmother on 24 Mar 1920 to an illness that had lasted almost a year and a half.


Soulé and her husband, Jim, lived in Charlotte's historic Fourth Ward neighborhood for the first few years of their marriage.  Then, they moved to the Dilworth neighborhood and lived there with her family for the rest of her time in North Carolina.

According to Charlotte's city directories, Soulé worked as an office secretary for most of the 1920s.  Then, in September 1929, she became a commissioned notary public.


Once she earned her notary public commission, she was consistently employed as a stenographer for the rest of 1929 and throughout the entire 1930s.  The 1940 U.S. Census, recorded in Charlotte on 01 April 1940, shows her working as a homemaker for the first time in her adult life.  That same census also indicates that she completed four years of college, though I have not yet been able to determine what school she attended.

Soulé never left the St. Vincent's Hospital after checking in.  Her death certificate indicates that she died two days later on 01 November 1920 of "cardiac failure" due to "Beri Beri Heart" resulting from "peripheral circulatory collapse."  Beri-Beri is caused by thiamine deficiency caused by chronic alcoholism.

Soulé Olive Lee Henderson's funeral was handled by Hollomon-Brown Funeral Home of Norfolk.  Her burial record is under the name "Sue Henderson," and she was initially buried on 02 November 1940 in what the Forest Lawn Cemetery staff referred to as the "city (or poor) section" of that historic Norfolk cemetery.  However, I learned that quite an unusual situation then arose.  Her ex-husband, Jim Henderson, traveled to Norfolk after learning of her death and burial, had her body exhumed, and relocated her remains to what was considered a more respectable section of the cemetery - Section 9-F, Grave (Plot) 8.  That became Soulé's body's final resting place.

"On Jan. 17, 1920...the 18th Amendment went into effect, banning the sale of alcoholic beverages. But as we all know, Prohibition didn’t stop people from drinking. Instead, it ushered in an even more thrilling chapter in the history of alcohol consumption–the 'Roaring Twenties;' with its speakeasies and gangsters.

Not only were men drinking as much as ever, but women joined them, too. Unlike saloons, speakeasies ('an estimated 32,000 in New York city alone,' according to Burns) were co-ed.

The 19th Amendment, giving the vote to women, was ratified Aug. 18, 1920. Women’s newfound freedom and empowerment came with additional challenges.  Female alcoholism became a huge problem, because more women had access to drink in a way they had never had before."

Another article entitled Alcohol Prohibition in the USA states:

"...middle-class people, not known previously as heavy drinkers but as abstainers or light drinkers, were able to afford the higher priced illegal booze, and it became fashionable to drink cocktails in one’s own home or at parties. Young women were among those who drank more, in conformity with the image of the 'flapper' and as part of the rise of a mass consumption society in the 1920s. Thus the law changed the pattern of consumption. Beer (the working-class saloon drink) dropped and the more compact form of alcohol, spirits, rose in popularity."

"One group of...newly public drinkers—whose emergence in that role was particularly surprising to contemporary observers was women...Women’s new willingness to drink in public—or at least in the semipublic atmosphere of the speakeasy—owed much to Prohibition’s achievement, the death of the saloon, whose masculine culture no longer governed norms of public drinking. The saloon’s demise also made it possible for women to band together to oppose Prohibition, as hundreds of thousands did in the Women’s Organization for National Prohibition Reform (WONPR).

"Public drinking by women and college youth and wet attitudes disseminated by cultural media pushed along a process that social scientists call the 'normalization of drinking'—that is, the breakdown of cultural proscriptions against liquor. Normalization, part of the long history of decay in Victorian social mores, began before the Prohibition Era and did not fully bear fruit until long afterward, but the process gained impetus from both the achievements and the failures of National Prohibition."

Though it is most certainly speculation on my part, I can easily imagine that Soulé - given all of the loss and tragedy in her too short life, coupled with the influence of the social circles in which she moved - may have found herself especially susceptible to the newfound freedom and newly acceptable solace provided by easy access to alcohol and its rise in popularity in private homes.

©Amy Wood Kelly, 2015 - I am happy to share my genealogical research and writing with others, as well as to help others with their research efforts.  However, please do not reprint this post in full or in part or use excerpts from this post without giving full credit to me, Amy Wood Kelly, as the researcher and author as well as providing the permalink to this post.  Thank you, in advance, for showing respect for my request and the work I put into creating this post.